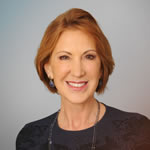 Cara Carleton Fiorina was born in Austin, Texas in 1954. Her dad had quite a successful career in politics himself, serving as Deputy US Attorney General and a judge on US Court of Appeals. Growing up, Carly Fiorina attended schools all over the world, including London, Ghana, and North Carolina. She got a philosophy and medieval history degree from Stanford University. She later attained a Master of Business Administration degree and a Master of Science in management from MIT.

Although Fiorina worked for many large companies, including AT&T, she is mostly known for being the chief executive officer of the Hewlett-Packard Company. During this time, she frequently fought with company board members. She oversaw the merger of HP and Compaq, which eventually led to layoffs at HP. The merger was criticized by the New York Times as “one of the more questionable deals of the time.” Fiorina ended up laying off about 30,000 American workers. The company’s value declined, and Fiorina was forced to resign. As soon as she left, the company’s stock jumped 6.9 percent.

What Are The Odds Of Carly Fiorina Becoming President?

Of all the candidates running for president in 2016, Carly Fiorina has the worst political betting odds. Despite her skill in political debates, her popularity has plummeted dramatically. This could be due to several factors, not least of which is her disastrous job performance as CEO of Hewlett-Packard. Or it could have something to do with her claim that she saw a video of Planned Parenthood harvesting baby parts, which was never proven to exist. Fiorina hasn’t had anywhere near the media coverage afforded to Donald Trump or Carly Fiorina, which is a major bane for her. Her odds to be the GOP nominee are +7,500, and +15,000 to become the next president.

Republican presidential hopeful Carly Fiorina is currently hanging in there for the 2016 election. Although she is one of the bigger longshots of any candidate in either party, she’s not giving up easily. To check out her odds, the best site to visit is Bovada. It’s an easy-to-use sports betting site that features moneylines on all the major would-be presidential candidates, including Fiorina. Bovada currently puts her at +5,000 to win the GOP nomination (slightly ahead of Ben Carson and John Kasich) and +12,500 (tying her with Carson and Kasich).

As the primary draws near, the odds could change at any moment. Bovada is the best site for the latest odds, because they post them before anybody else does. Their sportsbook is very cut-and-dry. If you don’t know much about odds calculations, Bovada has a trusty calculator that does all that for you. You simply click on the candidate or candidates of your choice and a few boxes will appear (one marked “risk,” one marked “win,” and one marked “total win”). You can plug whatever numbers you want into any of these boxes and Bovada will calculate it for you. It’s a very nice feature that makes wagering simple and headache-free. Join Bovada Now!

Carly Fiorina On The Issues

Carly Fiorina is a pro-life candidate who wants to overturn Roe v. Wade. She says she believes in equal rights for women. Fiorina believes in the death penalty for extreme cases. She says she doesn’t support legal marijuana, but that the states should be able to decide. She believes in school choice and is against common core education. Although Fiorina does not deny the existence of global warming, she believes environmental regulations will not stop it. On free trade, she would like to stop the practice of outsourcing. Fiorina is a strong gun rights advocate. She would like to get rid of Obamacare, strengthen the military, and would like to give immigrants a legal pathway, but not to full citizenship.

Carly Fiorina’s positions are conservative enough to attract many GOP voters, and her debating skill is impressive. With Carly Fiorina running in the Democratic camp, the GOP has their own female candidate, one who champions women’s issues fervently. This could broaden her appeal and attract female voters.

Fiorina would probably like most voters to forget about her time at Hewlett-Packard. She was fired by her own board, which does not look good no matter how you try to spin in. In fact, several industry commentators have labeled Fiorina as the “the worst CEO of all time.” She lacks any kind of political experience. She even ran for Senate in 2010, but lost to Barbara Boxer.